How my Aunt Doris’s particle board mobile home bothered her:

Formaldehyde. You may remember it fondly from high school biology days — a clear liquid preservative with dead things floating in it that made your eyes sting and your nose run. I don’t know what your decorating style is, of course, but I think it’s safe to say that formaldehyde is not a substance most people associate with their homes.

But formaldehyde is used as an ingredient in a wide number of household products and building materials. Many of those products and materials seep, or “outgas,” formaldehyde gas. And that gas can accumulate in the air inside buildings and houses.

Now, the formaldehyde gas that builds up inside your house isn’t enough to pickle you. After all, the clear liquid in the biology specimen jar was the straight stuff. But even at levels as low as 0.10 parts formaldehyde to every 1 million parts of air in your house (0.10 ppm), that crummy feeling you have all the time could be your house making you sick.

“Sufficient evidence exists to conclude that indoor air pollution … may pose serious acute and chronic risks,” the Environmental Protection Agency reported to Congress. And most indoor air quality experts agree that the No. 1 problem is the same stuff as in that pickling jar.

Formaldehyde is one of a large family of chemicals referred to as volatile organic compounds (VOCs).  The “organic” means they contain carbon in their structure. The “volatile” means the compounds vaporize — become a gas — at normal room temperatures.

If you left the lid off that jar, all the liquid would eventually evaporate and become part of the mixture of gases that make up our breathing air.

What does exposure to formaldehyde in your home air do to you? Oddly, formaldehyde affects different people with widely differing levels of severity. An estimated 10 percent of the population is very sensitive to formaldehyde, showing symptoms at extremely low levels. Others seem immune to the stuff, even at fairly high concentrations.

People who are sensitive to formaldehyde show symptoms at levels even lower than that.

What is a “normal” level of formaldehyde? According to Richard Knights, indoor air quality expert in Seattle, formaldehyde in outdoor air is usually found at levels less than 0.01 ppm. No standard for safe levels of the stuff has been set for indoor air. But levels even lower than 0.10 ppm can be associated with symptoms of “building- related illness.”

Assuming you don’t have a home bio lab, from where in your home could formaldehyde be coming? The United States Consumer Product Safety Commission lists these major sources:

If you have unexplained symptoms — chronic respiratory infections, headaches, stuffiness or chronic fatigue — or if anyone in your family has asthma, if you feel better when you’re out of the house, or when all your windows are open, you should probably have your house tested for elevated levels of formaldehyde. Call the US EPA in Seattle at 206-553-4973 to get a list of labs that can help you.

If you don’t have any symptoms, you probably needn’t bother having your house tested. But you should certainly take a hard look around to identify possible sources of the gas. Once you’ve identified them, you can take reasonable steps to reduce the amount of formaldehyde coming from them.

Reducing formaldehyde need not call for drastic measures. Tune in next week to find out how to keep your house from becoming that pickling jar.

Formaldehyde is a useful chemical, and we use a lot of it. If the Formaldehyde Institute would return my calls I could tell you how much of it we use every year — a figure in the billions of pounds anyway, some fraction of those billions of pounds may have ended up in your home. If enough of it has, it may be making you sIck, whether you know it or not.

Feeling groggy whenever you’re home for long? Red eyes, stuffiness? Unexplained nose bleeds? Odd memory lapses? Chronic respiratory problems? According to allergist Dr. Gordon Baker, of Burien, these can all be symptoms of exposure to formaldehyde.

If you have these symptoms, you should have your home tested for formaldehyde.

If you’re not sick, especially concerned or sensitive, don’t bother having your home tested. But there are steps you can take to help make sure your home isn’t emitting a lot of formaldehyde, and you should probably take them in any case. Long-term exposure to formaldehyde is a good thing to avoid …

(Knights uses particle board as a generic term for a variety of pressed- wood products, including particle board and medium-density fiberboard. For the purposes of this article, I will do the same.)

Particle board is composed basically of sawdust or wood chips and urea- formaldehyde glue. According to Knights, this inexpensive wood product will outgas formaldehyde virtually forever. If you have extensive amounts of unsealed particle board, you most likely have a lot of formaldehyde in your air.

Does the underlayment wood you expose have a one-directional grain? Can you gouge long splinters from it? If so, then it’s plywood or oriented strand board, and you don’t have a problem. If there is no grain, and the wood particles are, well, particles (like sawdust), then it’s particle board and you may have a problem.

Next question: What lies between the carpet and the particle board? A plastic or rubber barrier is what you want. A carpet pad that is slick and plasticy, or rubber waffle foam, might be an adequate barrier. Rebond pad, a multicolored chopped foam pad, and most other carpet pads are not a barrier to formaldehyde. If this is what you have, you’ll need to seal the floor.

If you have symptoms of formaldehyde exposure, pull up that carpet and pad right away. Cover the underlying wood thick sheet of plastic and then re-carpet the floors. Carpets made around 1980 may contain formaldehyde in their glues. If your carpet dates from around then, toss it or test it. If it is newer, Knights suggests you replace it if you wish or go ahead and reinstall it if you need to save money, because it will soon outgas any formaldehyde it has picked up from the floor.

If you have allergies, consider ditching carpeting altogether. Cover your floors with hardwood or vinyl flooring. These will shut out formaldehyde coming from the underlayment — and won’t harbor dust particles.

If the formaldehyde isn’t causing problems for you or your housemates, you can wait until the carpet needs replacing anyway, then install the plastic barrier.

Knights has found that three coats of oil-based nitrocellulose lacquer or paint or polyurethane cuts outgasing by about 90 percent. These coatings aren’t exactly wearing white hats themselves — they release toxic solvents into your air as they dry, and they contribute to smog. But they do dry up and get it over with, unlike particle board, which will outgas merrily ever after. A water-based polyurethane coating is much safer, but does not cut outgasing by as much.

Another option for shelf tops is heavy plastic shelf liner — the kind that sticks to the wood. Be sure to seal the undersides of shelves, too. Any exposed particle board will outgas formaldehyde.

Some unpainted wood cabinets are made of hardwood plywood, such as birch or ash. These are also made with urea-formaldehyde glues, and sensitive people may react to formaldehyde from them. You can try sealing these with polyurethane. Particle board furniture is the last big category. Small fry, such as stereo speakers, aren’t normally a problem. But large pieces, such as the big “entertainment centers” in which you store a stereo, a television and a VCR, can introduce acres of particle board. Paint these as described above, and do it outdoors, if possible.

Groan. This all sounds like an unbelievable pain in the neck, doesn’t !t?

Why can’t you just open a few windows? Install a fan? Blow away the formaldehyde?

However, since the air outdoors might be considerably cleaner than the air inside it, opening a windows is not a bad idea, weather permitting. Throw an extra blanket on the bed and fling open a bedroom window tonight.

Susan McGrath’s column in the Home/Real Estate section of The Seattle Times.

Reprinted with permission of The Seattle Times from September 29 & October 6, 1991. 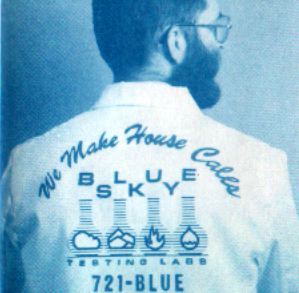 Do you have a problem with mold? moisture? radon? asbestos? odors? formaldehyde? VOCs? ozone? carbon monoxide? stuffiness? etc.? — Call or write before it gets worse!

(I do not do structural, pest, lead paint, drug lab, or Phase One surveys; or industrial hygiene, or hazardous waste.)

I'm building this website myself; please help me with suggestions; send them to blueskylab@pobox.com. Thank you. — Richard